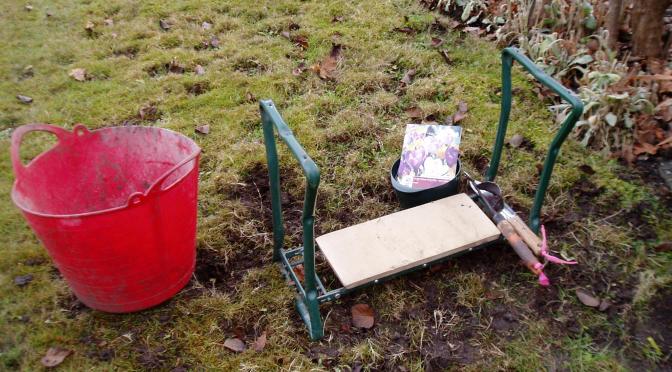 To C, that’s just not enough.

C carries a big grudge against dandelions.  He harbors dark thoughts & plots their demise.   He’s carried bucket loads away from the lawn after battle.  But still he lives in fear that the common dandelion will win the war.

This fall I initiated a new plan.

After having some success during wet seasons past, I decided to have another go at digging the dandelions out – and this time replacing them with crocus.

Fall is the proper time to plant bulbs. Considering I’ve dug the hole to get the dandelion out, I might as well take advantage of the effort, right?

My good friend AT planted the idea in my mind years ago.  When she was very young, her dad had employed the same reasoning in his yard: replace dandelions with crocus.  I’ve never seen that lawn, but in my imagination it is wonderful.

The crocus of choice promises to grow no higher than 4 inches tall.  They bloom in mid February.  Even if they’re still blooming when C brings out the lawnmower, they should be safely below the blade.  Cross my fingers.

After some rain in the fall, most plants can be dug out quite easily.  The soil is moist, and therefore softer, and easier to dig.   Dandelions however, have multiple, deep, sometimes cork-screwing roots.  If any section of root remains in the ground, it’ll happily renew itself.

For this project I chose the dandelion patch just outside the fence-line.  It was especially resplendent in dandelion.  It’s also a high visibility area that C is the most embarrassed about.  I gave special attention to get as much root as possible.

Working an hour or two at a time, I slowly made progress.  There was so much digging that the lawn looked pretty rough for the first while.

Well over 400 crocus bulbs were planted.

I’m hoping that by spring there will be a colorful blooming meadow.

So much of gardening doesn’t seem to be about having a green thumb.  Having a strong back is certainly a plus.  So is crossing fingers.   Wish me luck.   🙂

PS – here’s the follow-up post a year or so later:

… and one from an established meadow