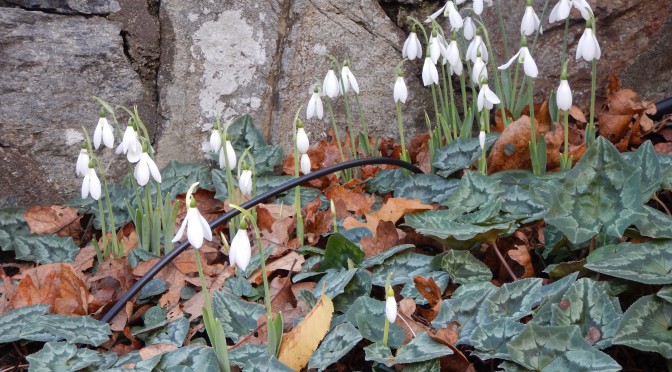 At first, I was in disbelief.  Here I am with errands done & time on my hands. What to do?

Check out Abkhazi Garden.   🙂    Each visit, I pick up a few more seasonal tips.  It is always lovely, no matter the month.

This time, even before walking through the gate, I’m awestruck.
Snowdrops!
At this time of year?
That’s crazy early.

I dig out my camera to prove the sighting.
An embarrassment of riches.

Now, I’ve heard the Oak Bay area is within the rain shadow of the Olympic Mountains (just across the Straits of Juan de Fuca).  Under the rain shadow, there’s more sunshine & less rainfall than anywhere else on Vancouver Island.

It’s real.  My buddy RG, who lives only 3 km down the road, and on the border of Oak Bay, has crocus 3 weeks earlier than we do.

But these snowdrops – – these are super early.
Unbelievably early.
November 20, 2015.

I asked gardening expert Jeff de Jong about them & he said they were regular snowdrops… no unique species or cultivar… just well established, in a prime location & very happy to be there.  Wow.

I wanted to tell y’all about the blooms, but though it might be taken as bragging instead.  For a while, I contemplated El Nino, & stewed about global warming.

Then Jeff posted a picture of a variegated camellia he spotted on December 14.  (Similar to this one I’d come by mid-February last year).  Perhaps his is a natural fall-blooming variety, but the posting took me by surprise anyway.  Even by Victoria’s standards, It felt too early.  Under our grey skies, this seemed an omen of climate change.

Then on December 20, BM posted a shot of daffodils blooming at Deep Cove Chalet.

Are these a super early variety?
Or just well established and happy in a prime location?

Again, I’m awestruck.
On the last day of Autumn – before winter even begins – –
blooms!

Now that Solstice &  Christmas have passed, and we’ve delighted in a few days of sunshine, the snowdrops are just starting to bloom in our garden.  I’m looking at the world with fresh eyes.  No matter El Nino or whatever else is going on, I’ve decided to enjoy the flowers along the way.

PS Here are some other snowdrop patches I admire:

Rainbows are pretty, happy, enchanting things…
so its nice to see them as public art around town.

A few on crosswalks.

And now on a staircase… of a church no less.

Each time I see a rainbow its a surprise & delight.

Wouldn’t it be cool it they became common-place?
Life can benefit from more whimsy.
🙂