I still delight seeing deer in our yard.  It feels like we’re a little more in tune with nature than we really are.

For the most part, we get along quite well.

Deer offer free pruning services, and I’m OK with the goofy shapes some of the evergreens end up with.

It’s also lovely when they pitch in to mow the lawn every once in a while.

They’re even helpful with supplying fertilizer.  Every little bit counts.  After all,  it’s not cheap to ship in a load of manure each spring.

It’s nice to know that someone else enjoys the garden as much as I do.  I’m sure we’re both equally excited to see the promise of some pretty summer flowers.

Since the deer seem to spend more time in the garden than I do, it shouldn’t surprise me that they get to enjoy the flowers before I do.  We just have different definitions of ‘enjoyment.’

Even so, I feel a bit ripped off that they eat the buds just moments before the flower opens.

Just 2 doors down the street, the deer also ‘enjoy’ C & A’s garden.  But the other day, I noticed their delicious patch of Crocosmia has blooms that haven’t been eaten!  WOW !!

That’s why, after years of thinking I’d never do it, I decided to experiment with deer repellent.

C & A tell me they used a spray called Plantskydd.

Asking around, a few other gardening friends recommended Bobbex.

I decided to go with the homemade recipe HM suggested.  Easy-peasy:

Thinking that I’d leave the far end of the garden as a buffet for the deer, and the closer part of the garden for my visual enjoyment, I sprayed foliage nearest the entrances of the house that I use the most.

What I’ve learned so far:

The good news is that the daylilies are blooming   🙂

C’s suggestion is to apply only where the deer enter the garden.  I’m wondering if that’ll be enough to deter them from coming in. 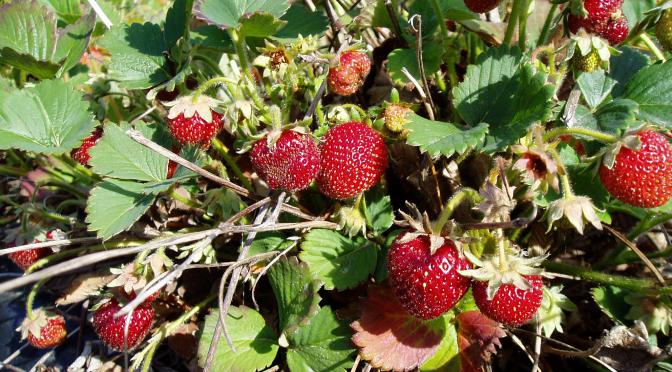 For me strawberry season is that magical time between the fresh energy of spring & the lazy warmth of summer.  It’s my happy place.

When else would I actually pay to perform manual labor in a dusty field?

Even that strip of sunburned back (where my t-shirt pulls out of my jeans because of bending for berries) is an acceptable part of the experience.

It’s all because not much else is better than the sweet taste of a strawberry picked in the sunshine.

Strawberries have been my favorite fruit since I was a little kid.

This year I enjoyed a morning in a local u-pick strawberry field with my friend  June.

June is a picking expert.  For a couple of years, on her little farm, strawberries were her business.

Unfortunately the busy time for her was early in the cold wet spring.  Digging baby plants out of muck in March is a far cry from picking berries in the sunshine of June.  Understandably farm helpers weren’t super excited to work in the rain.  June put in some pretty long hours harvesting runners.  She wasn’t ready to stick to that workload for too many years.

Instead June decided not to sell the strawberry plants in her fields.   With the plan of harvesting the berries in the warmth of June, she’d at least mitigate some of the original expenses of the business.

Believe it or not, there aren’t that many folk excited about daily field labor even in the warmer weather.

When big orders from community clubs hosting strawberry tea parties came June’s way, she was often the only one out in the field.  She became a pretty fast picker.

I’d have thought that by the time the berry production petered-out & June plowed over the field, she’d be well and truly DONE with strawberries.

Happily she still enjoys the delicious fruit & was as excited as I was to spend a sunny morning  picking our fill in a strawberry field at Dan’s Farm.

The lush green symmetry of a well-tended lawn is something I can appreciate.  But I can’t be bothered fussing with it myself.

Just down the road our neighbors have a teeny tiny front yard.  They chose something other than the classic square of grass.  There’s something artistic about it that really appeals to me.