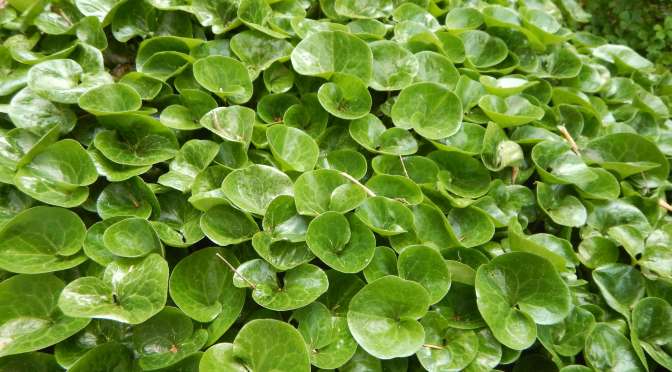 Wild Ginger looks lovely carpeting the understory of a Pacific Northwest forest. I’ve often admired it in its native landscape & longed to grow it in our garden.

Years ago, I bought a small pot at the Swan Lake Native Plant Sale & dug it into a nice spot in our woodland.
It didn’t survive.
Apparently, Asarum caudatum is only summer drought-tolerant “once established.” Mine died before its roots grew deep enough to survive between waterings.
My bad 😦

Later, I sourced another one from the Native Plant Study Group. I carefully planted it in a pot in our courtyard, where I knew it would get enough water. It thrived & eventually filled the pot.
Redeemed!!!!! 🙂

By this spring, the Wild Ginger was established enough to divide.

Carefully, I slid the plant into a tub of water to tease the roots out of the soil. There’s so much to learn when I get a really good look at the roots of a plant. Asarum caudatum spreads through rhizomes, slowly travelling outward, just under the soil & starting new plants. This way, the established mother ginger can support the young ginger until its new root system develops & reaches deep enough into the ground to find moisture itself.

The original plant had crept around the pot several times. It created at least a dozen decent-sized root balls.
Score! 🙂 🙂

We’ll get several pots to tend through the summer diligently. With regular water & attention, these larger root balls will develop some of those delicate feeder roots & be ready to go into the garden in a few months.

Asarum caudatum is also known for shy spring flowers that hide under its evergreen leaves. Last month I found seed heads leftover from the blossoms. (Flies & beetles pollinate them – so those beasties had paid better attention than I had when the plant was flowering). I searched for some sign it self-seeded into the pot. (Ants typically carry the seed away.)

There were at least 6 Wild Ginger babies. Most were pretty tiny & I worry they might not survive the transplanting. Here are 3 with roots that are large enough to show up in a photo.

It took 4 new pots the same size the ginger had just come out of to give homes to all the divisions. That’s 5 in total.

By late September or October, the weather should still be warm & the rains will make the ground workable again. It’ll be an excellent time to transplant our treasures. They’ll settle in over winter & be ready to begin fresh in the spring. I reckon that with this many pots, we’ll be able to test them in a few different spots — to see which locations they like best.

I know myself well enough to avoid plants requiring too much moisture. Hanging baskets typically require far more attention than I’m prepared to give, so I’ve created a (relatively) drought-tolerant one.

It turns out White Stonecrop is tough enough to survive under my care. Yeah, baby!
(It gets an 8 oz. glass of water every afternoon when I get home from work.)

This discovery was a fluke, really. A couple Sedum album were already growing in the moss I peeled off some rock to create the basket liner. I popped a small reservoir in the bottom before adding the soil & other plants. A few spare sedums went on top for good measure. They grew & exceed my expectations.
🙂

Have you got any other ideas for tough-as-nails, drought-tolerant baskets? 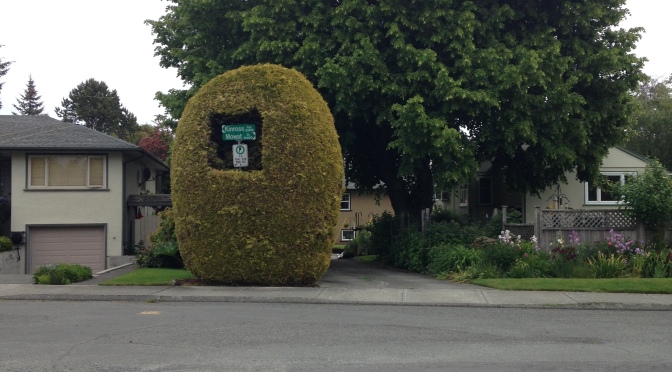 We were cycling along, minding our own business, when I just had to laugh out loud.

It’s a Hedge Monster consuming a street sign.
Caught in the act!
🙂

It’s a funky neighbourhood place marker.
Do little kids use it to help them find their way home from school?
How big was it when it was first planted?
How long has it been this big?
So many questions…

The foliage density impresses me… as does the tidiness of clipping inside the shrub itself — around the street sign.

The stains on the sidewalk & driveway tell me the hedge sometimes overwhelms its allowed space.

It could easily impede

How often does the gardener sheer this shrub to keep it tidy?

I giggle to myself & cycle away, on the lookout for more fun.