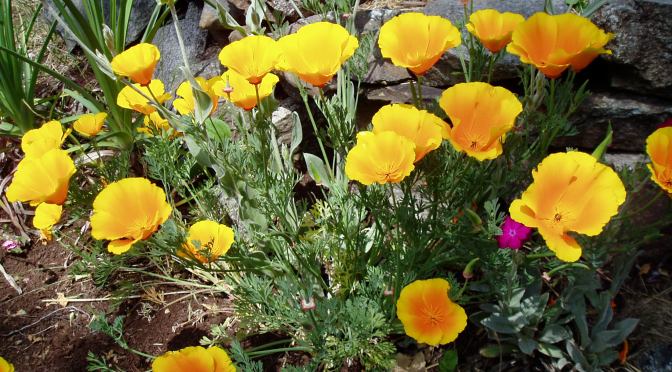 I like the saturated orange of the California Poppy bloom.  It’s bright and happy.

Even more, I like that the plant survives well on roadsides & rocky areas.  A plant that doesn’t need nurturing – bonus!

This little patch of poppies lives just down the street at Snake Rock.  It blooms in mid-spring & continues well into the dry summer.

Of course, the thought occurred to me, “We NEED that in our garden!” Can’t you imagine how lovely a wave of bright orange would be in the shrub border?

Even C is encouraging.  He really likes the bright orange blooms, too. So, for the past 5 years, I’ve gathered seed from the roadside, then spread it through our gardens.

There’s been the occasional reward, but mostly I’ve had little success.

The California Poppy has a long tap-root, so where ever it pops up, that’s where it has to stay.  It does not like being moved.  And it doesn’t seem to like being watered either.   Nor fed.  Nor coddled in any way.

The shrub border had a fair amount of fertilizer, mulch & water over the past few years, as the plants were all so new & getting established.  Maybe that’s been too much attention for the poppy.

The most successful patch is on our rocky hillside.  It’s a well-drained site and bakes in the sun.  The California Poppy will grow in the soil, but seems even happier in the gravel of the pathway!  Go figure.

So far, I’m resisting the urge to weed it out of the path.  I’ve decided that it’s ‘whimsical’ growing there.

I’m happy about growing a local wildflower.  I’m also delighted that the deer, who spend their afternoons on our little mountain, leave the California Poppy alone.

My plan is to keep spreading seed in the rest of the garden & be happy with whatever we get.  That’s the true definition of ‘low maintenance,’ isn’t it?