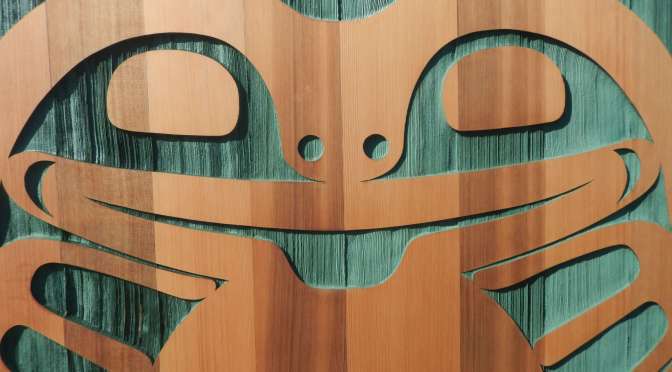 A new public art installation is just a few blocks away at Cedar Hill Rec Centre.

Three squared totem poles mark a junction in the walking trail.
But these poles are more than just sculpture.  They’re hollow boxes suspended on posts – –
box drums!
GIANT box drums!
How cool is that?  Interactive art!

At the official opening, the artist, Carey Newman, said a few words about these Earth Drums.  Then he introduced his brother to play a First Nations’ composition created especially for these drums.

After years of living on the West Coast, I recognize the raven on the tallest pole.  The frog, on the shortest pole, is also recognizable.  It’s tougher seeing the wolf on the 3rd pole, but eventually, I catch on.

The audience at the Official Opening was appreciative.  I wanted to play with the drums right then, but shyness made me decide to come back when the crowd had thinned.

Yesterday the sun was shining & I explored the different tones of each instrument.  Hikers seemed curious & interested in the dynamic installation, too.  Its placement is a blatant invitation to play.  Can anyone resist?

Then a gaggle of pre-schoolers surrounded the poles.  A low burble of music ensued.  🙂  No, really – – it was music.  The pitch was low enough…  the frenzy actually became a pulse.  It was more like music than any Christmas drum-set I ever played. (The neighbours need not worry.)

There’s some lovely public art in Greater Victoria.  I’m glad my municipality (Saanich) promotes it.  I’m especially pleased Carey  Newman has the vision & skill to bring this kind of magic to our neighbourhood.