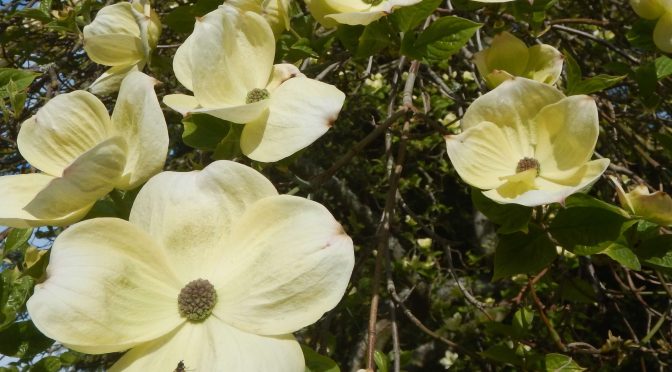 On the very southern coastal region of BC is our native Pacific Dogwood (Cornus nuttallii).  So admired that it’s honoured as our provincial flower.

Across the continent, Eastern Flowering Dogwood (Cornus florida) is native to the southernmost tip of Ontario.

The answer? A genuinely Canadian fix: combine them.

Enter H.M. Eddie (Henry Matheson Eddie).  A nurseryman in BC’s Fraser Valley who got a kick out of creating new varieties of any number of plants.  His 1945 success, ‘Eddie’s White Wonder,’ is the combo of the Pacific & the Eastern dogwoods.

Eddie’s dogwood is pretty much disease-free!  Beyond that,

It’s been such a triumphant landscape success that Eddie’s White Wonder was honoured as Vancouver’s Centennial tree...
and as one of my favourite trees to find blooming during our morning walks each April 🙂