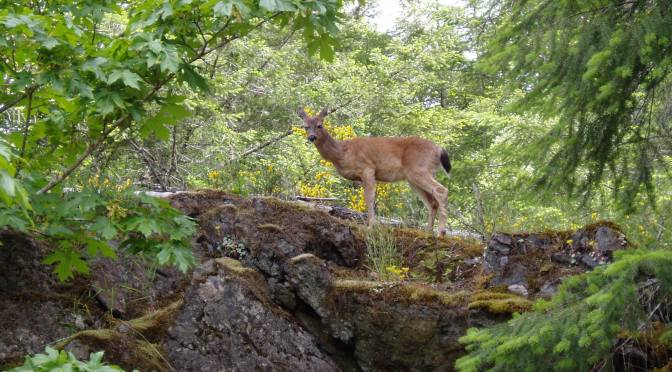 Now there’s Proof the deer really do hang out in our garden.
Photographic proof!!

This moment holds me still.. until I gather my wits & move carefully away from the window to get my camera.  I’ve been trying to get a decent shot of this fellow for over a month now but all the photos have turned out blurry….

Slowly moving back to the dining room window, I pretend to be calm & oblivious of the animal just a few yards away.  I don’t want to spook him.

Surprisingly, growing up in the-back-of-beyond certainly never presented an experience of a deer so near – – unless it was already dead & being prepared for the oven.  But that’s just not the same.

I’m a little in awe.  And quite glad to have the window between me & those antlers.  (There’s no fear when it comes to the doe & fawn.  I ‘shoo’ them out of the yard quite regularly.)

As I watch, it becomes clear he’s not just looking for a little shade.  He has a taste for apples.

Well, there are plenty of apples this year, so sharing those is not really an issue.  I guess that if there is anything in the garden that I really want to be left alone, it’ll need to be caged in or sprayed with some of that stinky stuff.

But then, I dislike the smell of that stinky stuff and don’t like the idea of fencing the whole yard. (& I do enjoy seeing the deer)… So, that leaves the challenge of finding lovely plants that are deer proof… or at least some the deer don’t tend to munch on… that often.

I’m feeling kind of discouraged right now, in the heat of summer, because this year the buck seems to have a taste for the Rudbeckia, the Coreopsis, & Chinese lantern.  (Those were left alone last year)   But I have to keep in mind we’ve had better success with other plants.

At different times of the year, this patch of the garden can look pretty good.   Many early spring bulbs survive just fine:

By May there are some other successes:

Check out this photo below from early June:

Later in the summer, there are other gems that I can be fairly confident that the deer will turn their noses up on:

Even into the fall & winter – – when the deer are especially hungry, there are some successful survivors in the garden:

No doubt there are other ‘deer resistant’ plants in our garden that haven’t been mentioned in this list. The more important thing to realize is that ‘resistant’ is as good as it gets.  Those critters are unpredictable when hungry.  Fawns are curious & just don’t know any better.   ‘Deer Proof’ does not exist.