The first glimpse was a flash of yellow along the trail’s edge. Mid-March can be so grey — but this was bright & happy. 🙂

Anything blooming at this time of year makes me smile. Western Skunk Cabbage is no exception. With a name like that, perhaps you’ll think yourself fortunate to see it in a photo rather than in person… but I’ve never noticed a foul odour around this plant. Some say the smell comes when leaves are bruised. Others contend it’s the flowers trying to attract pollinating flies & beetles.

Lysichiton americanus is also called the Swamp Lantern. To my mind, this name is more suited. The flower spike is like the candle flame & it’s cupped by a protective spathe that glows & reflects the light– just like a lantern.
A more fitting name, right?
Even still, I often revert to the first name I learned & struggle to remember this one. Perhaps I just need to concentrate more.

In early spring, the flowers emerge in wet areas all along the Pacific Northwest. This spring is no exception. The low laying wetlands bordering Esquimalt Lagoon are prime habitat for this west coast native.

I’ve seen lots of Swamp Lantern before, but just around the corner the patch swells into the largest. The southern trails at Royal Roads University are a prime pick-me up for my March blues.

The leaves follow the bloom, unfurling in a rosette around the flower. At first they’re small, but they grow quickly in the rich, moist soil.

By May, the plants are large & lush. Here’s a patch just off McKenzie Beach near Tofino.

Through the summer they grow even bigger. At peak, a single leaf can be 2 feet wide & twice as long!
Dramatic, eh?

It’s no wonder folks in the UK were impressed when it was introduced as an ornamental in the early 1900’s. It became very popular. It received an Award of Garden Merit from the Royal Horticultural Society.

The conditions in England are so similar to Vancouver Island it thrived. Within 50 years Lysichiton americanus escaped the British garden & was gradually naturalizing along streams & wetlands.
That’s a little too much drama.
Now, the RHS advises against its cultivation.

I’m glad to see Swamp Lantern here, where it grows naturally. It warms my heart. I’m relieved it hasn’t been threatened by more competitive introduced species like many of our wildflowers have been. Its a reminder of how delicate an ecosystem can be.

Lorraine says:
Hi SV,
I hope you are well and still landscaping.
I remember one of the naturalist talking about bears eating them. So had to look it up.
http://www.mossomcreek.org/swamp-lanterns-skunk-cabbage/
Stay safe,
LS
https://www.yyjproductions.ca/ 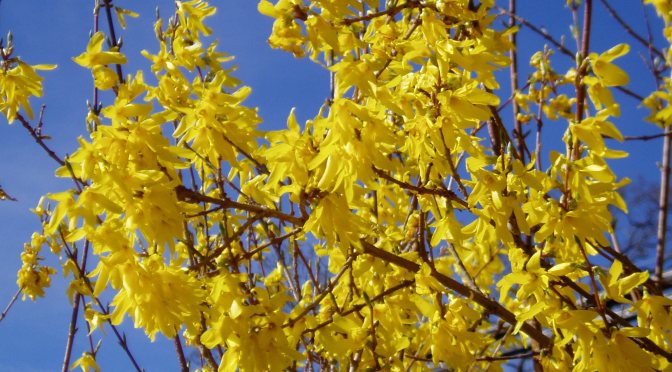 Birds are more plentiful this month. They’re singing, mating & nest-building. I like to clean & refill birdbaths for them. It’s also nice to provide some nesting materials seeing as how I’ve already composted much of the natural material over winter.

Now’s also the time to finish up dividing those overgrown hardy perennials:

The grass is growing steadily now,
Make sure the mower is serviced and ready for the season.

Watch for ‘damping off’ disease in seedlings in the greenhouse or indoors. This fungus causes the stems to collapse and the seedlings to fall over.

Ponds
Remove fallen leaves and other decaying plant debris from ponds. Frogs and other aquatic life will be emerging from winter hibernation so a good tidy up now prevents stagnation & algae build-up.